Better late than never, here is a new batch of penises.

[For the visually impaired: Pictured are nine dicks, each one representing a different state. Alaska’s has icicles. Hawaii’s has a flower tucked  into its pubes. Colorado’s is smokin’. New Mexico’s is prickly. New York is Empire sized, with a couple of Big Apples. Nevada’s dick is a one armed bandit with some substantial cherries. Oregon has gone overboard with the piercing. Kansas is rather flat. And Florida is, well, it’s Florida.]

[For the visually impaired: Pictured are the dicks of nine science dudes: Oppenheimer, Schrodinger, Watson, Crick, Edison, Tesla, Bohr, Galileo, and Darwin. Oppenheimer’s dick is totally da bomb (exploding in a mushroom-headed cloud). Schrodinger’s pants may or may not contain his dick. You won’t know until you unzip the fly. Watson and Crick’s dicks form a double-helix. (Not pictured: Rosalind Franklin, whose work they used without credit.) Edison was a total dick, but his just looks like an old-fashioned lightbulb. Tesla’s is electric. Bohr’s balls are anatomically atom anatomy. Galileo’s dick looks to the stars. Darwin’s dick is show in three stages of homo erectus. Like my work, it’s highly evolved.]

It’s true, there are probably thousands of versions of these characters in sexual situations on Deviant Art. But this allows you to skip to the meat of the question, “What is in their pants?” without having to compromise your search history.

[For the visually impaired: Pictured are the penises of nine cartoon characters: Popeye, George Jetson, Fred Flintstone, Homer Simpson, Charlie Brown, He-Man (Master of the Universe), Skeletor, Shaggy, and Dungeon Master. Popeye’s dick closely resembles his arm, which is probably related in some way to his disproportionately large forearms. George Jetson has some anti-grav cock rings. Fred has a bone pierced through his bone. Skeletor’s boner is quite bony. I almost drew a picture of Dungeon Master’s whole body, because that guy was a total dick.]

Why doesn’t Joker have a Prince Albert? Because that’s exactly what you’d expect and he’s all about confounding expectations.

[For the visually impaired: Pictured are seven villainous dongs. They belong to Joker, Magneto, Harvey Dent, Doc Ock, Carnage, Red Skull, and Thanos. Joker has a face tattooed on the end of his dick, with the meatus as the nose. Magneto shouldn’t do paperwork in bed, because his dick has attracted a bunch of paperclips. Doc Ock is mechanically enhanced for his partner’s pleasure.]

Apparently M. Knight Shayamalan is making a Tales From the Crypt movie, so of course I had to celebrate this with a picture of the Cryptkeeper’s wormy boner. Yes, it should have rotted away first, but somehow it was preserved (adiposere? formaldehyde? who knows) and is still semi-functional.

Also, I know that some of you may not be familiar with male chastity devices, but that’s what Norman Bates has on his man tackle. You can google that if you want, but it’s your own fault if someone checks your search history and finds that there.

[For the visually impaired: Pictured are nine horrific dinguses. They belong to Norman Bates, Frankenstein’s monster, Pinhead, The Mummy, The Cryptkeeper, Chucky, Freddy, Leprechaun, and Dracula. Chucky’s private area is actually just a slight bump in the plastic. Freddy’s head is actually Freddy’s head. Leprechaun has some surprisingly stereotypical tattoos of clover and a rainbow, and Dracula’s dick somehow resembles Gary Oldman.] 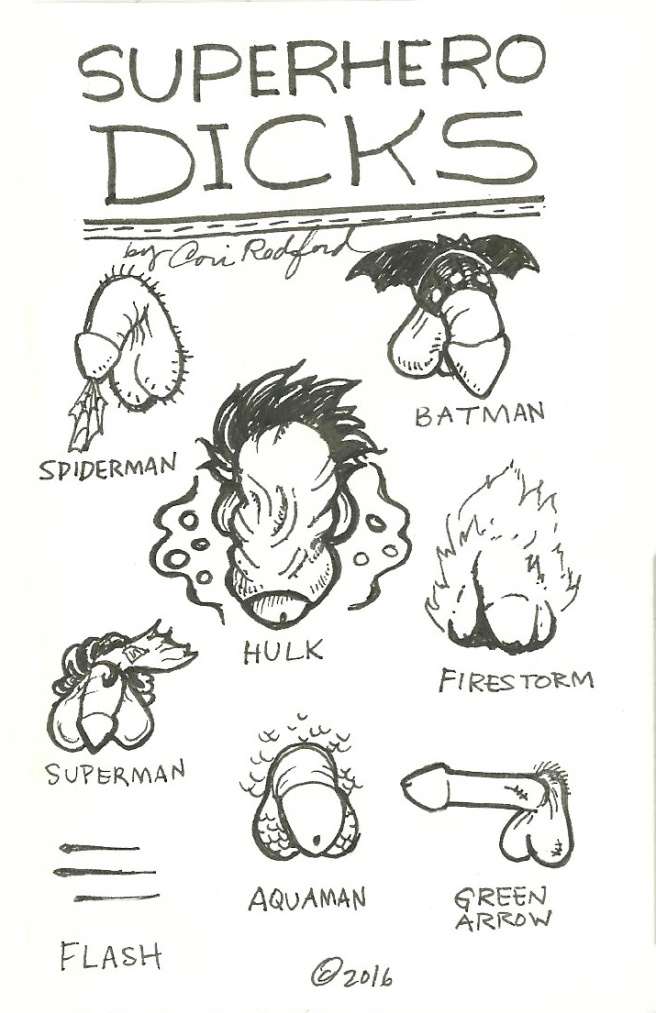 Despite appearances, Aquaman does not have molluscum contagiosum. He’s just naturally scaly in his bathing-suit area.

[For the visually impaired: Pictured are seven heroic cocks. They belong to Spiderman, Batman, Hulk, Firestorm, Superman, Flash, Aquaman, and Green Arrow. Batman has a studded collar on his dick, and his pubes are shaved into a bat. Green Arrow has a very straight shaft. The Hulk’s dick is just glowing with gamma radiation. The Flash is so fast, even we can’t see his junk.] 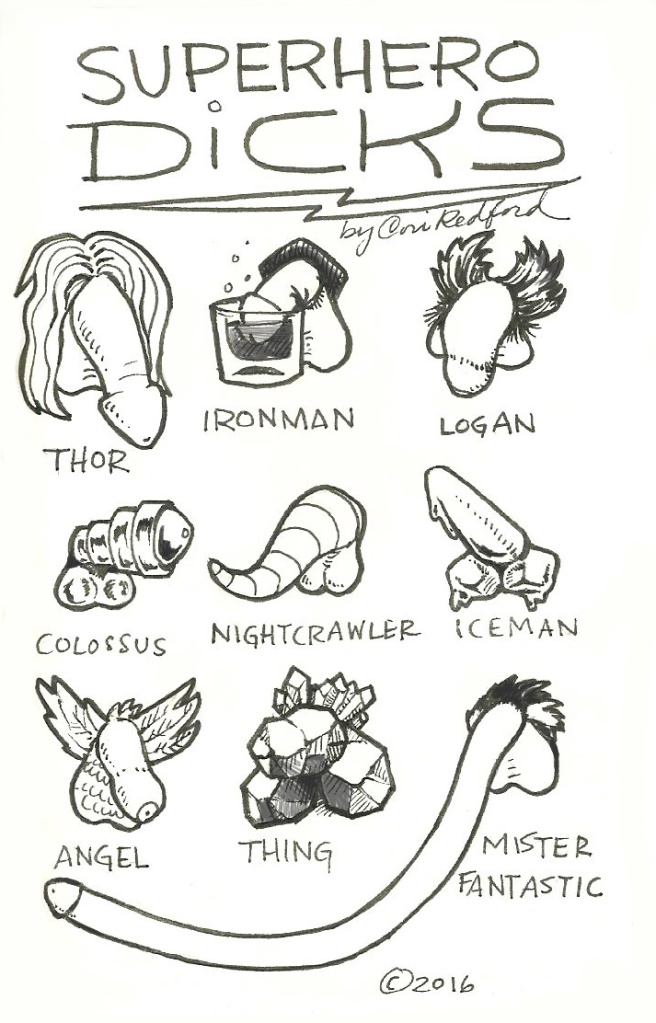 I’ll be out of town next Sunday, so here’s part 1 of Superhero Dicks. I’ve got another page of these, plus supervillains, villainous vaginae, horror dicks, and more.

[For the visually impaired: Pictured are nine dicks, each belonging to a comic book hero: Thor, Ironman, Logan (aka Wolverine), Colossus, Nightcrawler, Iceman, Angel (aka Archangel), Thing, and Mister Fantastic. Thor and Logan’s dicks are reminiscent of their hairstyles. Ironman has his soaked in whiskey, just like the rest of him. Did you remember that Mister Fantastic has the ability to stretch out parts of his body? I did.] 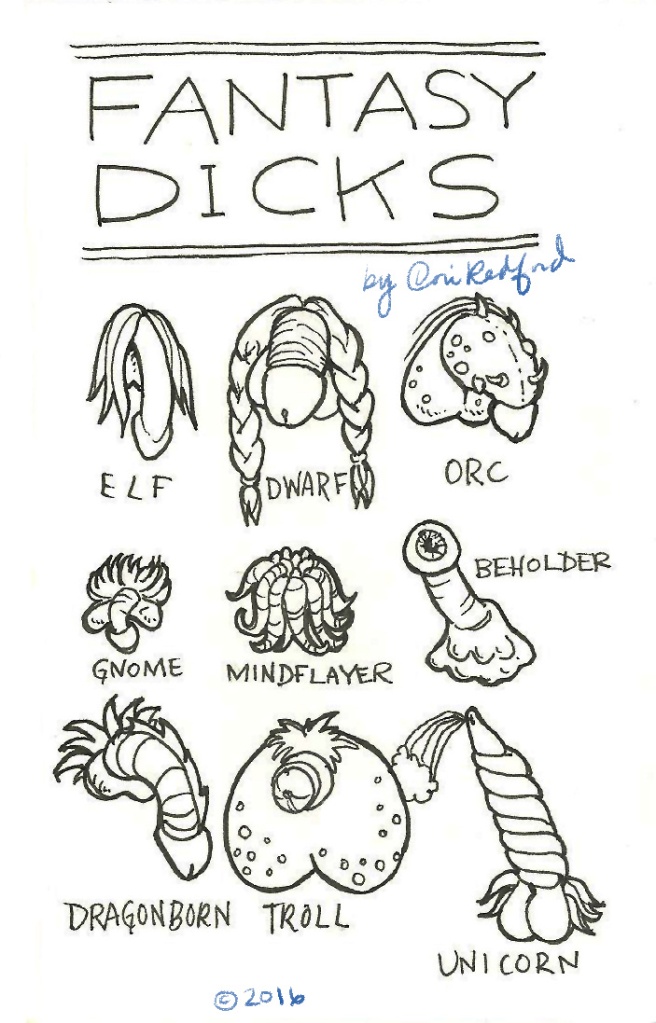 Before you ask, yes that unicorn is jizzing a rainbow. Because duh.

[For the visually impaired: Pictured are nine dicks from nine different fantasy races/creatures. They include elf, dwarf, orc, gnome, mindflayer, beholder, dragonborn, troll, and unicorn. The beholder has an eye at the end of its member. The dwarf has braided pubes, and the rest are pretty much how you’d imagine, but 10% funnier.]

For your viewing pleasure: More! Alien! Dicks! Because I was bored. Also because I’ve been sick this week and playing a bunch of Stardew Valley. I suddenly reached the first of winter, and it was just too close to reality as 5 inches of snow fell last night.

I’ve got six more pages ready to go, but I’m not sure if I should just put them up or space them out. I’ll eat a bunch of samosas and cheesecake and figure it out.

[For the visually impaired: The picture is of eight penises, each representing a different race from the Star Trek universe: Cardassian, Ferengi, Klingon, Vulcan, Romulan, Andorian, Trill, and Bajoran. The Klingon dick looks the most dangerous. The Vulcan and Romulan are identical except for their manscaping.]

Fuck it. I guess I just can’t keep it in my pants. Here are some more dicks.

[For the visually impaired: Pictured are nine lovingly hand-drawn penises, each depicting the artist’s idea of what the reproductive organs of Star Wars races look like. They include: Wookie, Mon Calamari, Gungan, Droid, Hutt, Yoda, Kamino, Dathomirian, and Ewok. There won’t be a corresponding page of female reproductive organs, since there are almost no females in Lucas films.]